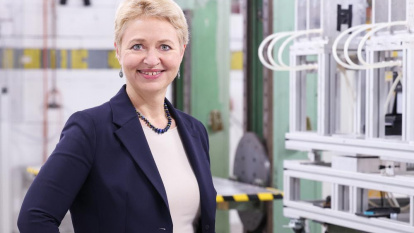 First woman on the board of DESY: Beate Heinemann. Image: DESY / Angela Pfeiffer

Beate Heinemann, DESY Principal Investigator and Professor of Physics at the University of Fribourg, will take over as Director of DESY’s High Energy Physics Division on February 1. This was unanimously decided by DESY’s supervisory body, the Foundation Council, at its meeting on 7 December. Heinemann is the first female director in the history of DESY.

“Beate Heinemann is a real asset to the research centre,” says Dr. Volkmar Dietz of the Federal Ministry of Education and Research, Chairman of the Foundation Board. “With her international experience, vast knowledge, reputation and forward-looking ideas, she will certainly lead the field of particle physics research into the next exciting era. As the first female CEO, she will mark also the DESY story!”

“I am very pleased that Beate Heinemann will join the management of DESY in the future”, says Helmut Dosch, Director of DESY. “His excellent expertise in particle physics and his experience in managing large international teams are perfectly suited to the many facets of fundamental research at DESY and the Helmholtz Association. We are proud to welcome him to the team and have looking forward to shaping the future with her.”

Heinemann succeeds Joachim Mnich, who joined European research center CERN as research director in early 2021, and Ties Behnke, who led the research division as interim director. At DESY, the particle physics division includes not only the particle physicists and technicians involved in the international experiments, but also theorists, the DESY computer department, the library and many service groups such as electronics development.

“DESY is a world-class laboratory and I am thrilled to be part of shaping its present and its future,” says Heinemann. “Many topics and projects are close to my heart – from fundamental research and developments in future technologies to sustainability and diversity. The next decade offers many exciting challenges, both scientifically and socially, and I look forward to the decisive contributions DESY will meet these challenges.”

We spoke to the new director and asked her about her plans and ideas.

What are your plans for your new research center?

As Director, you are not only responsible for your own division, but for DESY as a whole. DESY as a whole is close to my heart. First of all, I think it is very important that we maintain and further expand our pioneering role as a center for fundamental research for the study of matter.

We know that many of the major breakthrough developments and changes stem from basic research. This is why I think it should continue to be the basis of research at DESY – but we also have actions and a research mandate in application-oriented fields, for example climate, digitalization or health . DESY can contribute with all its research areas, for example through new accelerator technologies, new methods for developing detectors or new facilities for photon science. And we must also prioritize sustainability on campus.

Another topic close to my heart, both personally and through my new office, is diversity. DESY must remain a cosmopolitan and diverse laboratory, and there is still room for improvement in many areas, for example the number of women in leadership positions.

And what about your own research division?

Of course, I also have ideas for particle physics, which is based on several very strong pillars at DESY: we participate in international experiments, have our own very interesting experiments on campus, a strong theory group and we are pioneers of digital transformation with our IT sector. . Thanks to our cutting-edge research, we are also very attractive to young scientists who come to us from countries all over the world to do their PhD, postdoctoral research or take up a staff position. We must continue to evolve to stay at the international forefront and review our strategy for the next decade.

In our detector assembly facility here on campus, for example, we are building several core components for the upgrade of experiments as part of the LHC accelerator expansion. DESY has taken on a huge responsibility – it is important that we deliver!

But we can also be proud of the exciting experiments we carry out here at DESY in the framework of international collaboration. The ALPS II experiment will begin next year. ALPS searches for dark matter using small, elusive particles called axions, which also play a role in several other experiments that are on DESY’s wish and planning list. If they all came, which I will of course defend, DESY would be world-leading in the very dynamic field of axion research. The excellent infrastructure we have at DESY as a national research laboratory for particle physics plays a major role here.

We can also be very proud of our theory. It rightly enjoys an excellent reputation around the world, based in particular on the fact that our experts cover more than 60 orders of magnitude in physics – from string theory to cosmology. With the future Wolfgang Pauli Center, it will be even larger and more multidisciplinary.

In the next few years, the course will be set for the successor project to the LHC, namely the next big particle accelerator, the technology and location of which have not yet been chosen. It is very important to me that DESY also actively participates in the preparation of this project in order to maintain and expand its pioneering role.

These are just a few of my ideas and we should always be open to new ones. We have a lot of smart, creative people here, and you never know what spectacular proposition they’ll come up with next.

DESY aside – what are the things that are most important to you?

Above all, durability is very important to me. Our generation bears the responsibility now; we must act now and think climate in everything, both in research and in the development of the DESY campus and Science City Bahrenfeld.

Fundamental research is also close to my heart because not only is it extremely interesting, but it can also stimulate innovation. Take for example the mRNA vaccine, which is based on 20 years of basic research, or the accelerators, which were developed 100 years ago in particle physics and are now used worldwide to treat tumors.

But above all, I am still determined to find out how nature works and what laws of nature underlie it. In my opinion, we are now in the most exciting period in particle physics since the structure of the atom was first discovered and then understood in the early 20th century. In about forty years, physics has been completely revolutionized. At this moment, we are again entering a new energy scale, the electroweak force scale, which is closely related to the Higgs particle and gives us many questions. Studying this scale in detail now is extremely exciting and can also lead to groundbreaking discoveries that no one can even dream of today.

You were born in Hamburg and also studied here. What’s it like to become the first female director at DESY?

First of all, it is a great honor for me to be the first female director at DESY, having taken my first career steps at DESY during my university studies. In general, it is very, very important to me that women have the same opportunities and find the same conditions as men in all areas. In a modern society, we must make the most of everyone’s potential, regardless of gender, religion or social or ethnic origin.

And I’ve always stayed connected to Hamburg: I’m a big HSV fan! As the eldest of three siblings, my dad took me to the stadium from an early age, and to this day I still watch every game with him (although usually on the couch rather than in the stadium) .

DESY is one of the world’s leading particle accelerator centers and studies the structure and function of matter – from the interaction of tiny elementary particles and the behavior of new nanomaterials and vital biomolecules to the great mysteries of the universe. . The particle accelerators and detectors that DESY develops and builds at its sites in Hamburg and Zeuthen are unique research tools. They generate the most intense X-radiation in the world, accelerating particles to record energies and opening new windows on the universe. DESY is a member of the Helmholtz Association, Germany’s largest scientific association, and receives its funding from the German Federal Ministry of Education and Research (BMBF) (90%) and the German federal states of Hamburg and Brandenburg (10%).