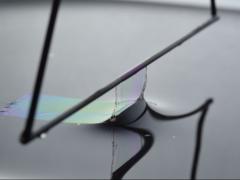 Recent correspondence in “Natural materialsby a team of campus researchers answers a long-standing question that experimental physicist Narayanan Menon says is “one of those things you should be able to look up in a textbook, a very basic question.” But when you look at the literature, there is confusion, and it has been going on for decades. Our work doesn’t scream “new discovery”, but this fundamental question is what we have clarified. »

In addition to Menon, the team included theoretical physicist Benny Davidovitch, polymer scientist Thomas Russell and a former UMass postdoctoral physics researcher, Deepak Kumar. He led the report’s experiments and analysis and is now starting as a new faculty member at the Indian Institute of Technology, Delhi.

Menon explains: “Deepak’s work addressed a hypothesis that had not been carefully tested until now,” he says. “No one was upset enough to spend a year finding out.”

Co-author Davidovitch writes that “the scientific question involves a mechanical response of tin films and filaments to fluid interfaces, which are affected by elasto-capillary stresses”. Moreover, “the crux of the matter here is the subtle way in which the surface energies of solid-liquid interfaces combine to generate stresses in a solid body.”

To clarify, Menon explains: “Imagine something light and flexible, the thin film, floating on the surface of the liquid – a leaf, the wing of a fly, a flower petal on a pond. It will stretch and lay flat, taut at the interface where it touches the water. You can try it in your kitchen with a piece of plastic in a glass of water.

The question is how stressed or “tense” the thin film is, he adds. “There are two answers found in the literature. One says the voltage depends on what the liquid is, the other says it depends on both that and how the solid and liquid interact. Both assumptions cannot be correct, so we had to get to the bottom of it. Our experiences undoubtedly show that only one of these answers is correct.

Kumar’s experiments revealed that the solid-fluid interaction – where a meniscus or lens-like interface forms on the surface of the liquid – “depends only on what the liquid is, not the solid. It doesn’t matter,” Menon reports. “For some people it’s going to be deeply upsetting, but for others it’s going to be sort of obvious. It’s the kind of thing you would expect to be familiar with already.

Russell adds: “When Deepak removed a thin film from the surface of a liquid and showed us that the menisci on the liquid and coated side of the film were absolutely identical, we were amazed, but this is unambiguous proof of ‘a hypothesis.”

Davidovitch says it was necessary to clarify this because “a recent resurgence of interest in elasto-capillary phenomena, where thin nanoscale solids exploit capillary forces to interact on fluid surfaces”, is underway in soft robotics, drug delivery and tissue engineering with reactive surfaces, among other areas. Researchers are increasingly applying thin coatings to surfaces for biomedical or materials applications where they wish to modify surface properties to control function.

Menon reflects on the result: “It doesn’t look spectacular but it clarifies something that has been muddy for a while. I always feel happy when you can do something in a simple way. What’s encouraging is that there are a lot of simple things to understand in science, which I find satisfying. You think there’s no room for simple naïve questions anymore, but that’s not true. This project was a good reminder of that.