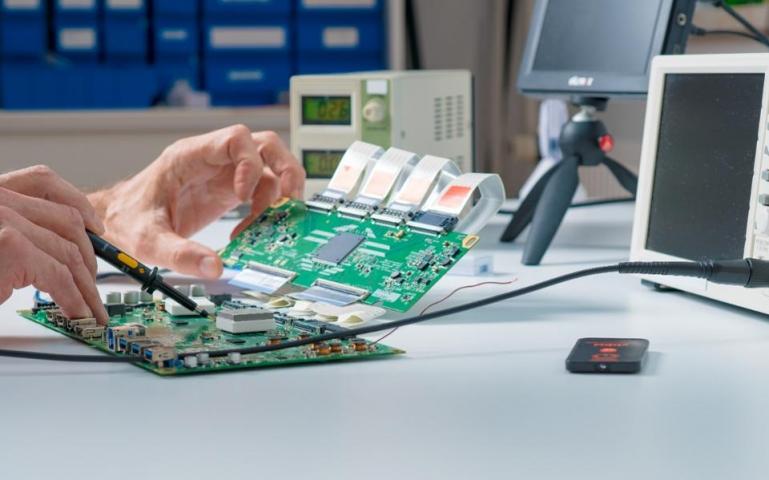 On Twitter-land, Rhett Allain made an observation regarding his class that touched me:

Sometimes students treat labs like a new gimmick. Take it out of the box, but the batteries and use it. If that doesn’t work, go back and read the instructions.

It instantly reminded me of a time when I was a graduate student, working in a lab at NIST, and we received a box from a tech company containing new oscilloscopes. These were mostly replacements for our lab stock oscilloscopes that had been built into one experiment or another, but included a new handheld oscilloscope (the face was roughly the surface of my Chromebook, but it was about four times thicker (which someone ordered just for fun, to see if it would help.

We opened it up in the break room to play with, and I distinctly remember someone casually tossing the shrink-wrapped manual to the side in order to gain access to a probe cable. Said probe was immediately inserted into a wall outlet, to provide a convenient source of oscillating voltage that could be used to check the capabilities of the oscilloscope. Which thankfully didn’t include “being damaged by running 110v wall current directly into the entrances”, not that anyone would have known that.

Now, to be fair, it was a room full of professional physicists for whom oscilloscopes were everyday tools, so we had a pretty good idea of ​​the basic functionality we expected to find in the oscilloscope; the manual was not really essential. But that happened with just about every new toy we brought to the lab – in another memorable case, one of the experiments needed to massively amplify a signal to audio frequencies, so they bought an amplifier designed for small rock concerts. Opening the box they almost immediately unscrewed and removed the lid of the device to take a look at the power transistors inside, blowing right past a sticker warning that opening it would void the warranty or something of the kind. Lifting the top plate revealed a second lid held closed by screws, with a huge warning in bright red letters stating that under no circumstances should it be opened by anyone with long hair or hanging jewelry, or anyone who drinks alcohol or uses drugs. (They knew their target audience, and they weren’t physicists…)

This habit has always seemed to me to illustrate one of the characteristic attitudes of physicists, especially experimental physicists, namely the feeling that almost everything is good to play. Presented with new equipment, we tend to start playing the violin immediately and only turn to actual instructions and documentation after hitting some sort of roadblock. This extends to just about anything – lab equipment, computer software, household appliances – and sometimes leads to funny problems. These mostly happen when there is a slightly non-standard way to start things. I have a doctorate. and a full professorship, and every once in a while I’ll stop at a minor point in a software package, like a senator trying to figure out the inner workings of Facebook, which happens to be explained in the first paragraph of the documentation that I didn’t read before I started poking pimples.

(There are limits to this, of course. Anything really expensive – the threshold for this varies, but a price tag in the thousands will usually do – or dangerous – high voltage, toxic chemicals, etc. – is treated with care and according to established procedures.)

There is something essentially childish about this approach, as a recent scene at Chateau Steelypips reminded me. One of the kids was sent home with a fever about a week ago, at which point we found we no longer had a reliable thermometer (where these things go I have no idea. ..). I picked up one of those “no-contact” thermometers that use infrared light to measure the temperature of a forehead, and brought it home last weekend. This launched a long period of trials to take the temperature of everything. The children ran around measuring their body temperature on the forehead, cheeks, neck, hands and other parts, but also tried to get the temperature of furniture, pieces of food and especially a very cute Charlie the puppy. tolerant, who endure an incredible amount of nudging and nudging. It was a lot of fun, at least for the humans, and Charlie got a few treats, so he was okay with that in the end.

(Critical findings from all of these experiments: the thermometer reads in a fairly narrow range and does not register temperatures at all for most household objects, or through dog fur. It will, however, read from bare skin to the inside of Charlie’s ear, and, oddly enough, the plastic cover on the recessed lights in our kitchen. Last but not least, our study conclusively shows that Charlie is a Very Good Boy.)

Of course, this “just start playing” isn’t a one-size-fits-all approach. In recent years I’ve changed the way I teach labs a bit, trying to move away from elaborate handouts with step-by-step instructions on exactly what to do, to giving students a bit of a role more active in determining what to do. I ask them to play around with the equipment a bit and judge the best way to do the measurement and how to process the data. A colleague of mine takes this approach much further than I have ventured, providing students with essentially no guidance, just a stack of materials that may or may not be helpful in gauging what they are looking for.

Some of them really care about it and do a great job of figuring things out. Others are really uncomfortable without step-by-step instructions, and spend a lot of time trying to tell me exactly what to do. I don’t know exactly what the source is. Part of it seems to be learned – a kind of loss aversion applied to grades, where they fear losing points for not doing exactly the right thing – and some students will come back once they realize that there really is no perfect secret procedure that they will be penalized for not finding out. Others never really let go, so I suspect there’s an innate component to personality as well. Some people just aren’t well suited to “push it with a stick!” approach that is characteristic of many experimental physicists.