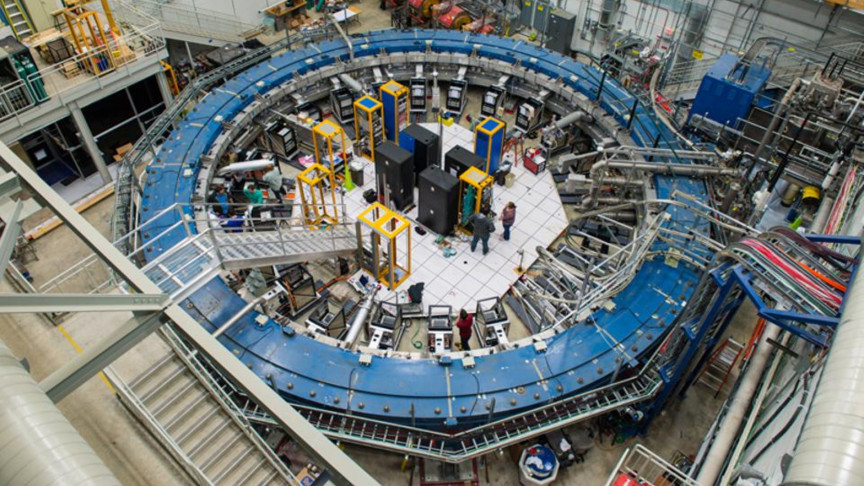 Is the Standard Model of Particle Physics really Kaput?

Lately the internet has been flooded with stories about the Standard Model of particle physics having been broken.

Muons are electrically charged particles, which means that when placed in a magnetic field, they begin to spin. Their rotation frequency is determined by the muon’s interactions with other particles and forces – this is called its g-factor.

Just as the Earth oscillates on its axis as it spins, a muon’s axis of rotation also oscillates. Twenty years ago, scientists at Brookhaven National Laboratory first measured the g-factor and muon oscillation, and they found values ​​that did not match predictions made by the Standard Model. The Brookhaven data came in at 3 sigma, or three standard deviations.

Last week, Fermilab’s G-2 experiment, which is still ongoing, concluded that muons gliding around their magnetized ring were wobbling more than originally. The group’s conclusions reached the level of 4.2 sigma, which is very close to the magical 5 sigma which corresponds to a 1 in 3.5 million chance that the data is statistical chance. Physicists regard 5-sigma as irrefutable proof of a discovery.

The question then is, “What gives muons that extra push that makes them wobble?” One explanation is that they are pushed by virtual particles that appear and disappear due to quantum fluctuations.

What is the standard model?

The Standard Model began to take shape in 1897, when English physicist JJ Thomson discovered the electron, and it was not considered complete until 2012, when scientists at CERN’s Large Hadron Collider discovered the boson. of Higgs.

The graph below displays the particles composing the standard model. They are divided into fermions and bosons, with the 12 fermions being divided into six quarks and six antiquarks, and six leptons and antileptons.

What sets quarks apart is that they have something called color charge, which causes them to interact via the strong force. Quarks can combine in two ways:

1. A quark and an antiquark, called meson.
2. Three quarks, called a baryon. The lightest baryons are the proton and the neutron.

Quarks also have electric charge and weak isospin, which means they can interact with each other through electromagnetism and weak interaction.

Leptons do not carry a color charge, so they do not respond to the strong force. Three of the leptons, the electron, the muon and the tau, carry an electric charge and thus interact electromagnetically with other particles. Three of the leptons, the neutrinos, carry no electrical charge, which means they only respond to the weak force. This makes them very difficult to detect.

Just as generations of people are made up of grandparents, parents, and children, fermions also come in generations, with both members of a succeeding generation having greater mass than a previous generation.

First generation charged particles do not decay, which is a good thing since protons and neutrons are composed of at the top and down quarks, which are first-generation quarks. Second and third generation fermions decay, which means they have very short half-lives. A half-life is the time it takes for half of a sample to decay.

Last-generation fermions can only be observed in very high-energy environments, such as the Large Hadron Collider. Neutrinos invade our universe and the three generations do not decay. However, neutrinos are very difficult to detect because they almost never interact with matter.

Our universe has four fundamental forces: electromagnetism, strong force, weak force and gravity. Now, for bad news, the standard model can’t account for gravity, so for now, we’ll ignore it.

The Standard Model explains the other three forces as resulting from particles exchanging other particles, the effect being that the force influences both particles. This is why gauge bosons are called force-mediator particles.

W± bosons carry an electric charge of +1 and -1, and they couple to the electromagnetic interaction, so when grouped with photons they collectively mediate what is called the electroweak interaction.

There are eight gluons which transmit the strong force among the six quarks. Gluons are massless, and because they themselves have a color charge, they can interact with each other.

The video of Peter Higgs, 83, taking out his handkerchief and wiping his eyes at the July 4, 2012 announcement at CERN that, finally, the Higgs boson had been discovered is truly moving. Higgs theorized the particle in 1964.

The Higgs boson generates the lepton, electron, muon and tau masses, and the quark masses. It does not generate mass for the photon and gluon, and since the Higgs boson itself is massive, that means it has to interact with itself.

Not only is the Higgs boson massive, with a mass of about 125 GeV/c2, or about 133 proton masses, but it decays almost immediately once created. This means that the Higgs can only be created and observed in a very high energy particle accelerator. Before it was observed at CERN, scientists at Fermilab were looking for the Higgs.

A year after the discovery of the Higgs boson, in 2013, Peter Higgs is finally honored with a Nobel Prize in Physics, alongside François Englert. On the day of the announcement, Higgs wanted to avoid media attention, so he walked out. He didn’t own a cell phone, so he only found out he had won the Nobel Prize when he met a neighbor.

Is the standard model really outdated?

Just last month, new scientist reported that Large Hadron Collider scientists found a deviation from the predicted rates at which particles containing the bottom quark decay into an electron and a muon. While the production of electrons and muons should be equal, this is not the case.

Other problems not explained by the standard model include:

The next two years will determine whether the Standard Model is still a correct representation of our universe, or whether it will need to be modified or abandoned altogether. Whatever happens, it’s going to be one hell of a ride.

The muon and its oscillation