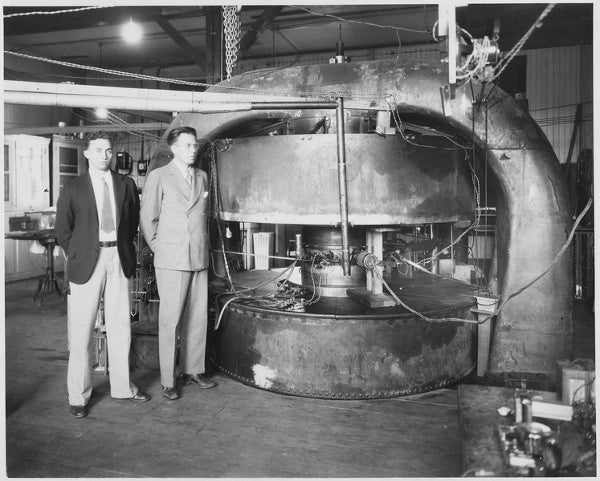 Particle physics is amazing – an impressive combination of ambitious research and technical skill. Theorists have constructed a picture of our universe on the smallest scale, and experimentalists have devised the most ambitious experiments to probe this infinitesimal world.

Their successes led to the Standard Model, a staggeringly successful theory and the most complete understanding of nature we have, which explains almost everything we observe in terms of a few numbers, particles and forces.

The crowning achievement, the Large Hadron Collider at CERN, is the largest and most complex Earth experiment in history. It cost $10 billion to build, has a circumference of 17 miles and straddles two countries. Its superconducting magnets, proton beam and power are marvels of engineering. No less than 13,000 brilliant people work at CERN every day.

Without a doubt, the LHC is the flagship scientific machine for particle physics in my generation. The discovery of the Higgs boson, a particle predicted by theory half a century earlier, was one of the great scientific achievements in history.

But there is a problem. The LHC is reaching its energy limits and it will take around 30 years to build the following large collider. This number is conservative, given the enormous complexity and cost involved. It also happens to be the approximate lifespan of an academic career.

Can we really expect an entire generation of young minds to sit on the sidelines waiting for the next experience to be built? More importantly, should we?

For a decade, particle physicists have pondered what’s next. How can we fill the many gaps in our knowledge? What is the nature of dark matter? What is our universe made of and how does it work? Why is the universe so big? Why is gravity so weak? Physics is far from over.

I think we should look to our past for the answer.

The first particle accelerators were built in the early 1930s. John Cockroft and Ernest Walton used a 200 kilovolt transformer to accelerate protons through a tube just eight feet long. Ernest Lawrence realized that if the tube were made circular and the particles were kept in motion, they would accelerate to much higher energies. His first “cyclotron” measured four and a half inches in diameter.

In its early days, particle physics was a dynamic and rapid interplay of theory, inspiration, calculation, engineering and tinkering. It all went into the mix, and each spectacular success bolstered support for the next leap forward, further galvanizing public support for big science in the 20and century.

The accelerator era was hugely successful, and I think it will still be, but in the meantime, we need to get back to our roots.

Over the past 40 years, a number of important and well-reasoned theoretical ideas have developed, but have not yet been tested experimentally, not because they are unworthy, but because we have focused on high energy experiments. These ideas imply the existence of new dimensions of space, new forces in nature, and new fundamental constituents of matter. These are ideas of great importance that cannot be tested simply by going into higher and higher energies.

While we have focused on supersized particle accelerators, modern technology has opened up a new frontier, heralding the era of high-precision particle physics. These technologies can be used in small, precise experiments that can search for a wide range of new phenomena. These experiments can fit on a table, require 10 people instead of 10,000, and cost a few hundred thousand dollars, rather than the billions required for a supercollider like the LHC.

We are on the eve of a renaissance of tabletop particle physics experiments.

Over the past decade, a number of bright and ambitious young theorists have begun to think seriously about applying new technologies to hitherto neglected areas.

I view the award as further proof that these young scientists are pushing the field in important new directions.

As a former teacher of these brilliant young people, I am overwhelmed with pride. As a theorist who has waited decades to test my work at the LHC, I see three bright lights that can help us avoid a “lost generation” in particle physics.

I hope that this newly awarded research will be continued with the same enthusiasm and dynamism that characterized the beginnings of particle physics.

Savas Dimopoulos is the Hamamoto Family Professor in the School of Humanities at Stanford University and the Archimedes Distinguished Visiting Chair in Research at the Perimeter Institute in Waterloo, Canada. His research in particle physics spans four decades.