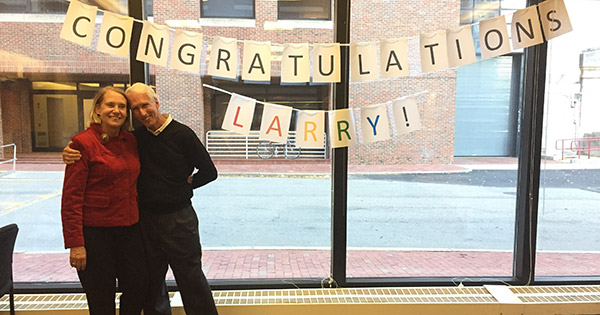 A professor once recalled how 16-year-old Larry Sulak came across in an interview for an unpaid summer job in his lab: “A bright-eyed, bubbly young man from Beech Bottom, W.Va.”, who said “Golly shits” when he talked about physics and engineering and who promised to do “whatever it takes…washing test tubes, cleaning up after experiments…sweeping floors” .

Sulak, the son of a television and radio repairman and a school cafeteria cook who was determined to keep his children out of the coal mines, beat two other contestants that day. Now, 57 years later, Professor Emeritus David M. Myers of Boston University and Emeritus Professor of Physics at BU College of Arts & Sciences (CAS) has won the highest US prize in his field, experimental particle physics.

Sulak, revered by his colleagues, loved by generations of students, and never too busy to fix a neighbor’s toilet – or explain the physics of a toilet – received the 2018 WKH Panofsky Award from the American Physical Society ( APS) for his work on things harder to explain: massive particle detectors and oscillating neutrinos. It has to do with the origins of the universe. More on that later.

“It was my biggest dream, but I never thought it would happen,” Sulak says.

The first person he called after finding out about the Panofsky Prize was his close friend and colleague of forty years, Sheldon Glashow, theoretical physicist and Nobel laureate.

“The Panofsky is a prize awarded for the development of experimental technologies,” says Glashow, Professor of Mathematics and Science Arthur GB Metcalf. “That’s exactly what Larry managed to do.”

Here’s what the APS award citation says: “For new contributions to detection techniques, including pioneering developments for massive water Cherenkov detectors that led to major advances in nucleon decay and neutrino oscillation.

Here is Sulak’s translation of what he did: In the late 1970s, when he and Glashow were both physicists at Harvard, he invented the technology for a massive 10,000 ton particle detector that would test Glashow’s great theory: “that the protons decay, which would explain the evolution of the universe from the big bang to today. Along with two graduate students and eventually a team of other collaborators, he built the detector in a salt mine under Lake Erie near Cleveland. They never found decaying protons. But they made two unexpected discoveries: neutrinos oscillate and when a star explodes, its mass turns into neutrinos. These are two of the many discoveries that led to Sulak’s Panofsky Prize. Its technology has also enabled the creation of a number of gigantic particle detection facilities around the world, in Canada, China, Japan, South Korea, at the South Pole and off the coast of Italy, as well as just in France.

“He tested and tested it and he proved that beautiful theory wrong,” Glashow says. “I wasn’t happy the theory was wrong, but I was glad Larry did it. He should have gotten the Nobel. They gave it to people who used his technology to make other discoveries, but not to Larry himself.

Glashow knows Sulak’s skill at getting the job done. A few years ago, Sulak says, “I fixed Shelly’s toilet.”

Sulak says he is always on the hunt for decaying protons and is, as always, focused on teaching and mentoring. He is particularly committed to bringing young female physicists, currently from the Middle East, who challenge gender barriers in science, to CERN (the European Organization for Nuclear Research), Switzerland, and to his program of BU student internships there.

“It’s fun to solve problems,” says Sulak. “That’s why I love teaching. These students don’t know what they can’t do.

Ask his students to talk about Sulak and its price and they can’t say enough.

Lina Necib (CAS’12), originally from Tunisia and currently a postdoc at the California Institute of Technology, spent a semester abroad working with Sulak at CERN. “It’s wonderful to hear that he’s being recognized,” she says. “He is an inspiration to all of us.”

Necib says his former teacher is “the most enthusiastic and passionate person I have ever met. He never took no for an answer – especially not from the European bureaucracy – and made it all happen. He was running through the CERN buildings to show us new things. My friends and I could barely catch up. It was obvious how much he loved what he did and how much he wanted physics to be accessible to everyone.

Bruce Cortez worked closely with Sulak on the Cherenkov detector and earlier experiments as a Harvard graduate student in physics in the 1970s. “Larry was the best teacher I ever had,” Cortez says, now chief scientist at AT&T Labs. “He didn’t care about titles or levels. He treated people the same, whether they were undergraduates, graduate students, or other professional physicists. If you wanted to work with him, he gave you a chance.

The project that led to the detector “probably would have made someone other than Larry think,” says U.S. Representative Bill Foster (D-Ill.), the only physicist in Congress and the other Harvard graduate student who has worked with Sulak on the detector. “But Larry just said, ‘That’s great, we can do all of that. “”

At a party celebrating Sulak, CAS professor and physics chair Andrei Ruckenstein called the Panofsky Prize “the crowning achievement of a long and distinguished career of research and training the next generation of physicists.” particles”.

Sulak is looking forward to accepting his award at the American Physical Society meeting in April 2018. Then, he says, he wants to throw a party for all the people, from all over the United States, Japan and around other countries, which collaborated on the detector which led to its price.