As a child, she played hopscotch in the suburbs of Athens. Today, the director of Fermilab wants the facility to lead the world in neutrino research.

Lia Merminga still remembers her first glimpse of the United States, as her plane arrived from Greece in 1983. On the descent to New York, Merminga saw the densely populated skyscrapers of Manhattan.

“I just felt inspired,” says Merminga, who comes from the outskirts of Athens. “I said, ‘My God, how privileged I am.’ I wanted to do something big. I still have that feeling now.

From there, Merminga went to the University of Michigan, where she earned her doctorate in physics and began her decades-long career innovating particle accelerators for high-energy physics research. She began leading these efforts, most recently leading Proton Improvement Plan-II (PIP-II), an ongoing upgrade of the Fermi National Accelerator Laboratory complex of accelerators outside of Chicago. Founded in 1966, the 6,800-acre site of Fermilab has hosted landmark experiments in particle physics, such as the 1995 discovery of the top quark.

Last April, Merminga became the new director of Fermilab, the first woman to hold this position. As director, Merminga oversees nearly 2,000 people working on cutting-edge experiments, ranging from the Muon G-2 experiment, whose 2021 measurement of the muon’s magnetic moment could point to physics beyond the Standard Model, at the Long-Baseline Neutrino Facility currently under construction, designed to study the properties of neutrinos that could help explain why the amount of matter dominates antimatter and why the universe exists.

Under his leadership, Merminga hopes to cement Fermilab’s position as the world leader in neutrino physics for decades to come. “We will do the definitive neutrino experiments here,” she says.

Merminga spoke to APS News about his life, career, and views on the future of particle physics.

This interview has been edited for length and clarity.

SC: You are from Greece. Can you describe where you grew up?

LM: I was born and raised in Chalandri, in the suburbs of Athens. I still have many friends who live in the area. I grew up playing in the street outside my house with other children. We played tennis, football and a game like hopscotch. I walked everywhere, to school, to the bakery, to the farmer’s market. The whole town had a high school and we were divided into girls and boys. The girls went to school in the morning from Monday to Wednesday and the boys in the afternoon. Then the following week, the program would change.

How did you decide to become a physicist?

In Greece, at 15, you have to choose between studying the humanities or the sciences. At that time, I knew that I loved physics and mathematics. Looking back, I really liked describing a physical phenomenon with the language of mathematics. For me, it was the ultimate form of elegance. I also liked that the physics and math problems had a real answer that wasn’t subjective.

My first exposure to science was through my mother’s and grandmother’s stories about my uncle [George Dousmanis], who had a doctorate in physics from Columbia University. He was legendary in my family, but he died very young, at 37. [from a heart attack]. I met him once when he came over from the United States when I was two, but I have no recollection of him. Later, when I became a graduate student, I was able to read some of his physics papers. I appreciated how exceptional he was and how unfortunate his untimely death was.

Also, when I was 13, a college friend of mine gave me a biography of Marie Curie written by her daughter Eva Curie. I just absorbed this book. Then, in high school, I had a fantastic physics teacher. All this influenced my interest in physics.

I’ve always loved theoretical physics, but it takes so long between the development of a theory and its experimental demonstration. For example, the Higgs boson was supposed to exist in the early 1960s, and it wasn’t discovered until 2012. In the meantime, thousands of people had to build the largest particle accelerator in the world.

When I was in graduate school looking for a PhD thesis topic, my current husband, who was a friend at the time, was a postdoc at Fermilab. He told me about a graduate program in accelerator physics. I realized that with accelerator physics you can do theoretical physics and validate those predictions using test facilities in a matter of months or a year. It also turned out that I love engineering. I decided to go into accelerator physics, and I’ve been having a blast ever since. 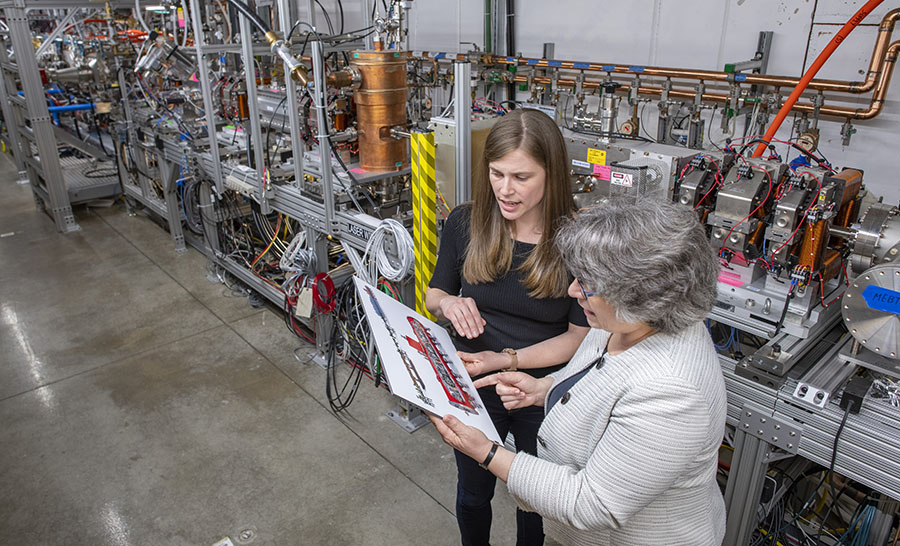 What are the major current challenges in the development of future accelerators?

We have pushed the performance of the accelerators in terms of higher energy, intensity and efficiency. A big challenge today is to reach higher energies using more compact machines. The ultimate breakthrough in our field would be to manufacture plasma accelerators [a method that would significantly reduce facility size].

A shorter term goal is to produce more efficient technology to create accelerators that consume less energy. I would like to see more progress on sustainable accelerators.

Without improved technology, future colliders would consume enough energy for a small town. What strategies are people working on to make accelerators more sustainable?

People are starting to make more energy-efficient components, such as superconducting and radio frequency (RF) power supplies. The design of the European source of spallation [a neutron source under construction in Sweden] also recovers the waste heat produced by the accelerators and then uses it to heat the neighboring buildings.

Proposed future colliders include a 100 TeV circular collider, linear electron-proton colliders like the ILC, and muon colliders. What is your opinion on what the particle physics community should invest in?

For the health of our field, it behooves us to continue these design studies of all these different types. But we still have to solve important technical and physical questions for each of these approaches. Fortunately, these approaches require similar research and development. For example, several of them require high-field magnets and highly efficient superconducting RF technology. CERN has already chosen to pursue a future 100 TeV circular collider.

What kind of behind-the-scenes activity goes into these massive particle physics projects?

There are not only a large number of people involved, but also a diversity of expertise and cultural backgrounds. For PIP-II [the upgrade to Fermilab’s accelerator complex], we have worked with partners in the UK, Poland, France, Italy, etc. Some are physicists, engineers, technicians, computer scientists, administrators, logisticians and even import and export control lawyers. This diverse set of people working towards a common goal – it makes for such an amazing result.

In 2019, a New York Times The editorial sparked a public debate about whether science drove the need for a larger collider, particularly because the price tag is in the billions of dollars. What is your response to these criticisms?

Colliders are essential instruments that have helped advance our field forever. The Tevatron, which until 2011 was the highest energy collider in the world, made it possible to discover the tau neutrino and the top quark. The LHC discovered the Higgs. In terms of discoveries, these investments have paid off extremely well.

Several Fermilab physicists have drawn attention to anti-black racism in science. They helped organize a #ShutDownSTEM strike in 2020 and formed a group called Change Now, which wrote a document calling for racial justice and fairness at Fermilab. How do you approach these issues?

Even before taking on my duties as director, I knew that I wanted to listen to our collaborators, our teams and our users on the culture of our laboratory. In this context, I launched what I call listening tours. I receive groups of 10 to 20 people for 30 minutes to an hour. In our discussions, I mostly listen. My goal is to reach every employee in our lab. We are now about a third of the way through about 2,000 people on staff. It is obvious that we have work ahead of us.

I read the ChangeNow document and met with group members one-on-one to continue the discussion. I want to understand how people feel and what they’ve been through historically. This deserves a long-term strategic plan, not a quick fix. I fundamentally believe that we must have excellence and diversity in our workforce, our activities and the operations of the laboratory, in order to achieve excellence in our scientific mission. Excellence means an environment where everyone feels they can thrive, can advance their careers, and can experience gratification in their work.

Sophia Chen is a writer based in Columbus, Ohio.