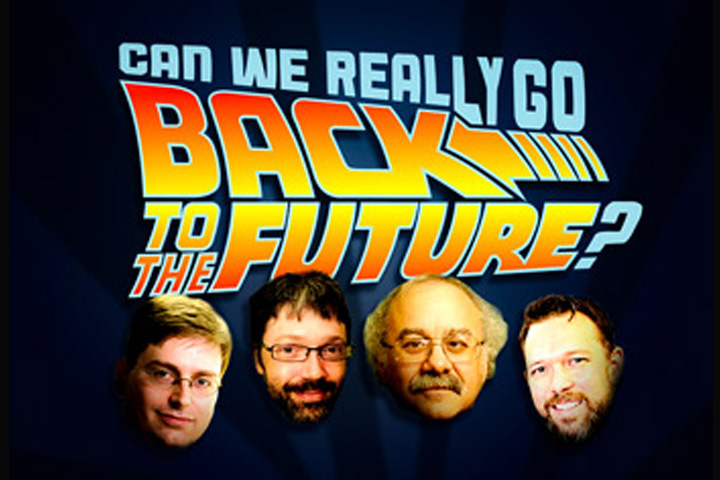 It’s October 21, 2015 and no one is taking a hoverboard to the skate park at lunchtime. But that doesn’t mean they aren’t celebrating “Back to the Future,” the day 30 years in the future that Doc Brown and Marty McFly visit in “Back to the Future II.”

So, to honor the iconic 1985 film series, W&M News asked William & Mary philosophers – metaphysicians – and scientists – theoretical physicists – if it’s really possible to go back to the future, plus a bunch of other things about movies, time and how their disciplines deal with these mysteries.

In the physicists’ corner is Professor Marc Sher, whose research interests include theoretical particle physics and cosmology – theory of electroweak interactions, Higgs phenomenology, cosmological phase transitions, astrophysics and supersymmetry. Most recently, he served as director of the National Science Foundation’s program for high-energy theory and cosmology.

It is also the subject of a 2013 article with this playful title: “The Higgs boson looks exactly like Marc Sher said. Now what?” He helped explain the Higgs boson to the world.

Josh Erlich, associate professor of physics from the class of 2017, joins Sher. Erlich’s research focuses on particle physics and cosmology beyond the Standard Model, as well as applications of the principles of string theory to other branches of physics. Erlich is interested in extra dimensions, supersymmetric gauge theories, the interaction between gauge theories and strings, and alternative interpretations of cosmological data. Along with Sher, he is a member of the High Energy Theory Group at W&M. He’s also a trustee of the Small Hall Makerspace, where students are surely working to turn a DeLorean into a time machine.

On the philosophy side, Chad Vance, visiting assistant professor, specializes in the metaphysics of modality and the theory of truth, but is also interested in ethics, epistemology, modern philosophy and philosophy of religion. He also has a foot in the science camp: his undergraduate work was in astrophysics.

He is accompanied by Aaron Griffith, assistant professor of philosophy. Griffith’s research mainly focuses on metaphysics (truth, establishment of truth, grounding, time, freedom) and on Kant’s theory Critique of pure reason. He is also interested in social ontology, feminism, philosophy of race, phenomenology and philosophy of religion. He’s currently working on a paper titled “Obligations to Future Generations and the Metaphysics of Time,” which likely primed him to talk about “Back to the Future.”

Is this the end of particle physics as we know it? Let’s hope not