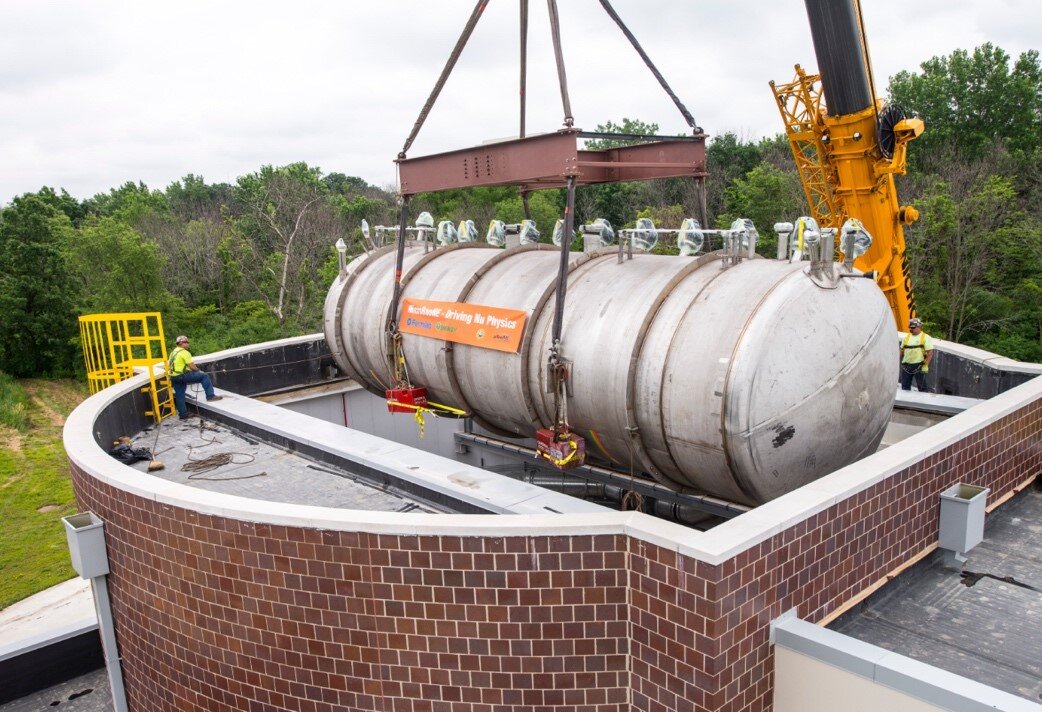 New results from a more than a decade-long physics experiment offer insight into unexplained electronic-like events discovered in previous experiments. The results of the MicroBooNE experiment, while not confirming the existence of a proposed new particle, the sterile neutrino, open the way to exploring physics beyond the Standard Model, the fundamental force theory of nature and elementary particles.

“The results so far from MicroBooNE make the explanation for the electronic-like anomalous events of the MiniBooNE experiment more likely to be physics beyond the Standard Model,” said William Louis, a physicist at Los Alamos National Laboratory. and member of the MicroBooNE collaboration. “What exactly the new physics is remains to be seen.”

The MicroBooNE experiment at the US Department of Energy’s Fermi National Accelerator Laboratory explores a striking anomaly in particle beam experimentation first discovered by researchers at Los Alamos National Laboratory. In the 1990s, the liquid scintillator neutrino detector experiment at the Laboratory saw more electron-like events than expected, compared to calculations based on the Standard Model.

In 2002, the MiniBooNE follow-up experiment at Fermilab began collecting data to further investigate the LSND outcome. MiniBooNE scientists also saw more electronic-like events than calculations based on the Standard Model prediction. But the MiniBooNE detector had a particular limitation: it was unable to tell the difference between electrons and photons (particles of light) near where the neutrino was interacting.

The MicroBooNE experiment seeks to explore the source of the anomaly for additional events. The MicroBooNE detector is built on state-of-the-art techniques and technology, using special light sensors and over 8,000 painstakingly attached wires to capture particle trails. It is housed in a 40-foot-long cylindrical container filled with 170 tons of pure liquid argon. The neutrinos hit the dense, transparent liquid, releasing additional particles that the electronics can record. The resulting images show detailed particle trajectories and, importantly, distinguish electrons from photons.

“Liquid argon technology is relatively new in neutrino physics, and MicroBooNE has been a pioneer for this technology, demonstrating what amazing physics can be done with it,” said Sowjanya Gollapinni, laboratory physicist and co-lead of analysis. “We had to develop all the tools and techniques from scratch, including how to process the signal, how to reconstruct it, and how to do the calibration, among other things.”

MicroBooNE included a series of measurements: one measurement of photons and three measurements of electrons. In early October, the results of the photon measurement, which specifically looked for Delta radiative decay, provided the first direct evidence disfavoring an excess of neutrino interactions due to this abnormal single photon production as an explanation for the excess of MiniBooNE energy. Delta radiative decay was the only background that the MiniBooNE experiment could not directly constrain.

The three new electron analyzes address the question of whether the excess is due to the scattering of an electron neutrino off an argon nucleus, producing an outgoing electron. The new results disfavor this process as an explanation for excess MiniBooNE, leaving the question of what causes the MiniBooNE anomaly still unanswered.

“In my mind, the fact that neither photon nor electron production explains the excess makes understanding the MiniBooNE results more interesting and more likely to venture into some very interesting physics beyond the Standard Model. “, said Louis.

With only half of the MicroBooNE data still evaluated, possible explanations yet to be considered (or tested in future experiments) include the possibility that as yet unproven sterile neutrinos could decay into gamma rays. The decay of the axion – the axion is another hypothetical elementary particle – into gamma or an electron-positron pair could also be responsible. Neutrinos and sterile axions could be linked to the dark sector, the hypothetical realm of yet unobserved different physics and particles.

“The possibilities are endless,” Gollapinni said, “and MicroBooNE will be on a mission to explore each one with the full data set. The results pave the way for further physics experiments, but a full understanding of the results will also depend on our colleagues in theoretical physics, who are very intrigued by these results.”

MicroBooNE is part of a suite of neutrino experiments looking for answers. The ICARUS detector starts collecting physical data and the Short Baseline Proximity Detector (SBND) will come online in 2023; both detectors use liquid argon technology. Together with MicroBooNE, the three experiments form Fermilab’s short-base neutrino program and will yield a wealth of neutrino data. For example, in one month, SBND will record more data than MicroBooNE collected in two years. Today’s results from MicroBooNE will help guide some of the research in the trio’s extensive portfolio.

Building further on MicroBooNE’s techniques and technology, liquid argon will also be used in the Deep Underground Neutrino Experiment (DUNE), a flagship international experiment hosted by Fermilab which already has more than 1,000 researchers from over 30 countries. DUNE will study the oscillations by sending neutrinos 1,300 km (800 miles) through the earth to detectors at the underground research center in Sanford, South Dakota. Combining short- and long-range neutrino experiments will give researchers insight into how these fundamental particles work.

At Fermilab or underground in South Dakota, Laboratory researchers bring the technology and analytical understanding to probe the mysteries of particle physics. What awaits us is unknown, but exciting.

“What we have found and continue to find with MicroBooNE will have important implications for future experiments,” Gollapinni said. “These results point us in a new direction and tell us to think outside the box. MicroBooNE’s journey to explore the exciting physics that awaits us has just begun, and there is much more that MicroBooNE will reveal in the years to come.”