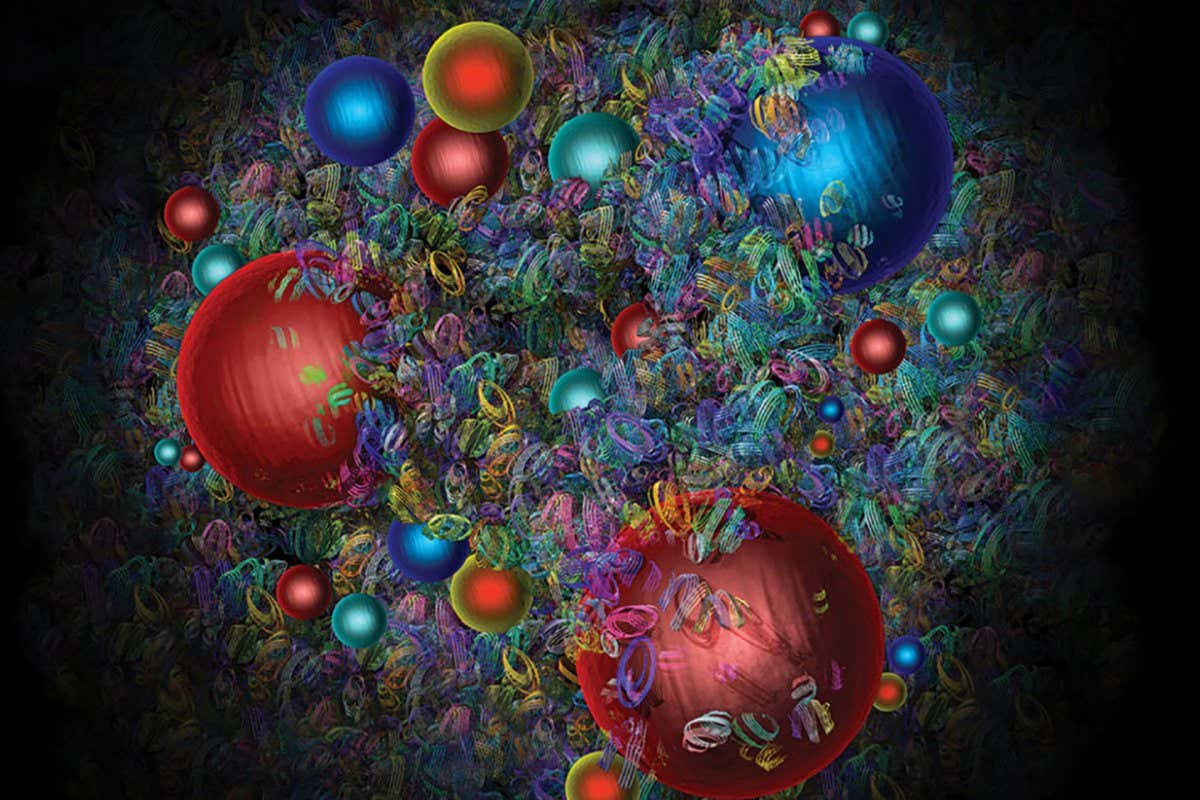 The classic description of a proton says it contains three smaller particles – two up quarks and a down quark – but a new analysis has found strong evidence that it also contains a charm quark.

The proton, a particle located at the heart of every atom, seems to have a more complicated structure than that traditionally given in textbooks. The discovery could have ramifications for sensitive particle physics experiments like the Large Hadron Collider (LHC).

While protons were once considered indivisible, experiments with particle accelerators in the 1960s revealed that they contained three smaller particles, called quarks. Quarks are of six types, or flavors, and the proton contains two up quarks and one down quark.

But in quantum mechanics, the structure of a particle is governed by probabilities, which means that there is theoretically a chance that other quarks could appear inside the proton as matter-antimatter pairs. An experiment at the European Muon Collaboration at CERN in 1980 suggested that the proton might contain a charm quark and its antimatter equivalent, an anticharm, but the results were inconclusive and were hotly debated.

There have been other attempts to identify the charm component of the proton, but different groups have found conflicting results and have had difficulty separating the intrinsic building blocks of a proton from the high-energy environment of accelerators. particles, where each type of quark is created and destroyed in rapid succession. .

Today, Juan Rojo of Vrije University in Amsterdam in the Netherlands and his colleagues have found evidence that a small part of the proton’s momentum, about 0.5%, comes from the charm quark. “It is remarkable that even after all these decades of study, we are still discovering new properties of the proton and, in particular, new constituents,” says Rojo.

To isolate the charm component, Rojo and his team used a machine learning model to come up with hypothetical proton structures made up of all the different flavors of quarks, then compared them to more than 500,000 real collisions from decades of particle accelerator experiments, including at the LHC.

This use of machine learning was particularly important, says Christine Aidala of the University of Washington, because it could generate patterns physicists wouldn’t necessarily think of on their own, reducing the risk of biased measurements.

The researchers found that if the proton does not contain a charm-anti-charm pair of quarks, there is only a 0.3% chance of seeing the results they examined. Physicists call this a “3-sigma” result, which is normally considered a potential sign of something interesting. More work is needed to increase the results to the 5-sigma level, which means about a 1 in 3.5 million chance of a random result, which is traditionally the threshold for a discovery.

The team examined recent results from the LHCb Z boson experiment and modeled the statistical distribution of proton momentum with and without a charmed quark. They found that the model fitted the results better if the proton was assumed to have a charm quark. This means that they are safer to suggest the presence of a charm quark than the sigma level itself would suggest. “The fact that very different studies converged on the same result especially convinced us that our results were strong,” says Rojo.

“Given how ubiquitous this particle is and how long we’ve known about it, there’s still a lot we don’t really understand about its substructure, so that’s really important,” says Harry Cliffe of Cambridge University.

The charm component of the proton could also have ramifications for other physics experiments at the LHC, Cliffe says, because they rely on accurate models of the proton’s substructure. The IceCube neutrino observatory in Antarctica, which searches for rare neutrinos produced when cosmic rays strike particles in Earth’s atmosphere, might also need to take this new structure into account, Rojo says. “The probability of a cosmic ray impacting an atmospheric nucleus and producing neutrinos is quite sensitive to the charm content of the proton,” he says.

Sign up for Lost in Space-Time, a free monthly newsletter about the weirdness of reality

Learn more about these topics:

How the Standard Model of Particle Physics Explains Our World