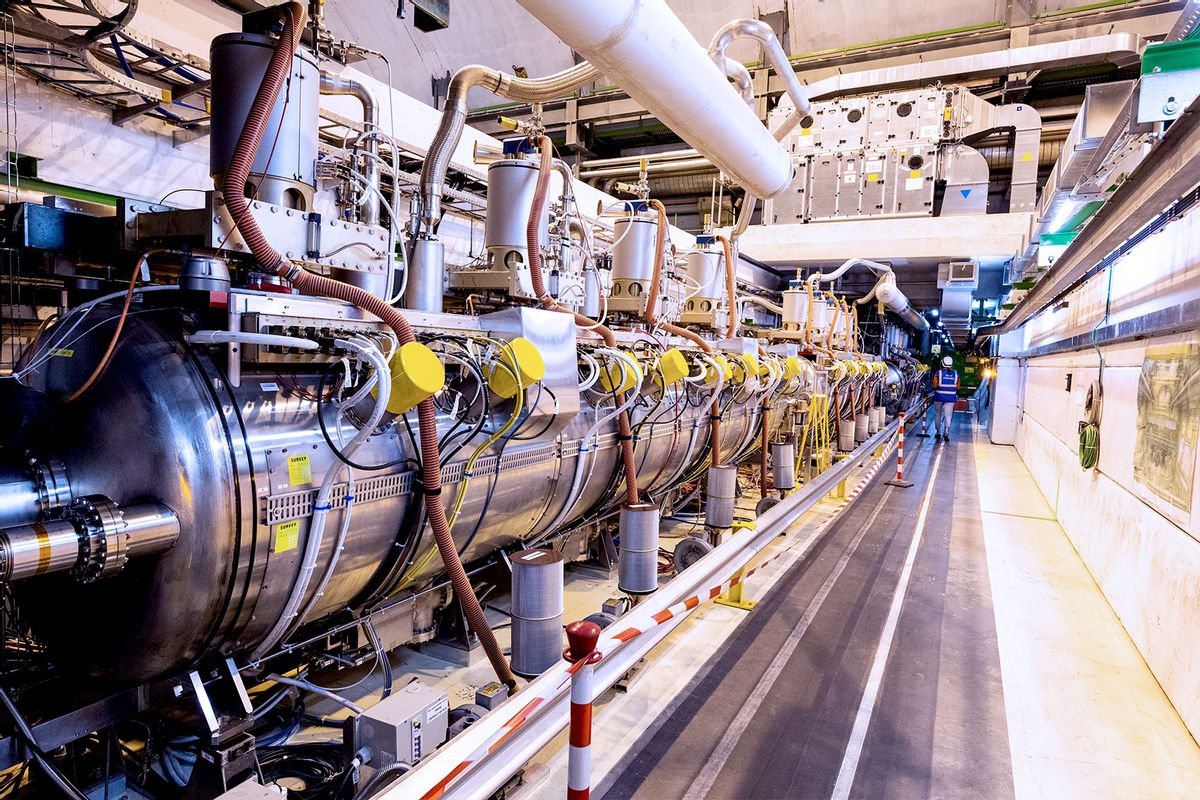 The model we have for understanding the fundamental particles of the universe is a bit like a gearbox: a small change in the properties of a single particle also disrupts the mechanics of other particles.

So when a paper finds the mass of a fundamental particle to be slightly different from what was previously accepted, it does more than just raise eyebrows in the physics world. If true, such a discovery would mean that fundamental physics is “wrong” in some as yet undetermined way, and would shake up particle physics for decades to come.

Our understanding of fundamental particles, known as the standard model of particle physics, is one of the most impressive human achievements of the past 150 years. It took thousands of physicists and engineers working over a century to put all the pieces together, starting with the discovery of the electron in 1897 and culminating in the discovery of the long-theorized Higgs boson in 2012. .

Earlier this month, after 20 years of analysis, scientists at Fermilab’s Collider Detector (CDF) announced that they had made the most accurate measurement of the mass of the W boson. After millions of tests and of observations, their mass measurement came out at 1.43385738 × 10-22 grams. (It seems light, but it’s heavier than it should be.)

The accuracy of the measurement of one of nature’s force-carrying particles is remarkable: scientists say the revised mass of the particle has an accuracy of 0.01%, twice as accurate as the previous best measurement. The results were published in the journal Science.

RELATED: Why Some Physicists Are Skeptical Of The Muon Experiment That Hints At ‘New Physics’

But there’s a big problem: This measurement conflicts with the value scientists use in the Standard Model’s theoretical inputs. In other words, if true, the mass measurement suggests that the standard model of physics – which is a gold standard theory that explains the four known forces in the universe and all fundamental particles – is on a ground brittle.

Unlike other fundamental particles such as quarks, electrons and photons, the W boson is not a particle that is usually learned about in science in elementary school. Yet, like these particles, it is fundamental to the composition of matter in the universe. The W boson is a messenger particle of what is called the “weak nuclear force”, which is one of the four fundamental interactions known in particle physics; the others are electromagnetism, strong interaction and gravitation. While the electromagnetic force and gravity are daily occurrences in human interactions and daily life, and the strong force is what binds atomic nuclei together, the weak interaction is not as overtly visible. Yet the weak force is involved in the radioactive decay of atoms, and is just as indispensable to the appearance of our universe today as any of the other three forces. And the weak interaction can’t happen without the help of a W boson.

To make the new measurement of the mass of the W boson, the researchers used collision data from the Fermi National Accelerator Laboratory, a now decommissioned particle accelerator in Illinois. Fermilab’s particle accelerator hurls protons and antiprotons against each other at near-light speed and observes the resulting burst of energetic particles up close, then extrapolates their characteristics.

During its operation, the accelerator managed to synthesize four million candidate W bosons, the properties of which have been repeatedly measured. Through extensive calculations, the scientists landed on their measurement, which is accurate to within seven standard deviations – well above the five standard deviations that yield a benchmark statistical result.

“We took into account our better understanding of our particle detector as well as advances in theoretical and experimental understanding of the interactions of the W boson with other particles. When we finally unveiled the result, we found that it differed of the Standard Model prediction.

“The number of improvements and additional verifications made to our result is enormous,” said Ashutosh V. Kotwal of Duke University, who led the analysis and is one of 400 scientists in the CDF collaboration, in A press release. “We took into account our better understanding of our particle detector as well as advances in theoretical and experimental understanding of the interactions of the W boson with other particles. When we finally unveiled the result, we found that it differed of the Standard Model prediction.

The difference? The new measurements place the W boson at about a tenth of one percent more massive than previously predicted and accepted. It sounds small, but it’s enough to cause a big problem in particle physics – if that’s true.

Schumm said the new measurement of the mass of the W boson “lacks compelling evidence.”

“The fact that the measured mass of the W boson does not match the predicted mass in the Standard Model could mean three things. Either the calculations are wrong, the measurement is wrong, or something is missing from the Standard Model,” writes high – energetic particle physicist John Conway in The Conversation.

“It is now up to the theoretical physics community and other experiments to follow this up and shed light on this mystery,” CDF co-spokesperson David Toback said in a press release. “If the difference between the experimental value and the expected value is due to some sort of new particle or subatomic interaction, which is one of the possibilities, chances are it’s something that can be discovered. in future experiments.

The Standard Model has proven to be incredibly good at predicting the properties of its constituent particles, and even the properties of novel particles. Due to its remarkable prophetic nature, physicists are eager to try and poke holes, which could lead to new discoveries and new physics. Indeed, as Salon reported in 2021, Fermilab’s Muon g-2 experiment produced some bizarre results that were slightly different from what the Standard Model projected – although those results didn’t quite go beyond the 5 standard deviation “gold standard” that would make them definitive. .

But when it comes to making such precise measurements and with such a small margin of error, some physicists say the experiment is just as likely to have flaws, rather than the Standard Model.

“You can ask, ‘Could this be an experimental effect, experimental error, and could calibration be the source? Well, it’s one of two possibilities,'” Bruce Schumm, professor of physics at the University of California–Santa Cruz, and the author of a popular book on particle physics, told Salon. “If the difference [in mass] is an error, maybe yes, the calibration of the detector is a very likely source of this error, of this error.”

Schumm said it is important to distinguish between accuracy and accuracynoting that one could make an inaccurate measurement very precisely.

Schumm said the new measurement of the CDF’s W boson mass “missed a smoking gun” – specifically, a clearly identified reason why other measurements from different experiments disagree with the CDF’s result for the mass of the CDF. boson W.

“It’s conceivable that all the other measurements are missing something and the CDF measurement did it more carefully and got the answer right,” Schumm said. “But I think in all likelihood either the CDF result is wrong or the body of the other results is wrong.”

Previously, Schumm had told Salon that it was “over-dramatization” to say that the standard model would one day be completely rewritten or cancelled.

“The Standard Model has always, from the day it was invented, been known to be what is called an ‘effective theory,'” Schumm said. He likened the Standard Model to the “tip of an iceberg”, in which the tip is observed and well understood even though we don’t know exactly what is underwater. “I would bet any amount of money [the Standard Model] will never be overturned, as a representation of that tip of the iceberg,” he reflected.