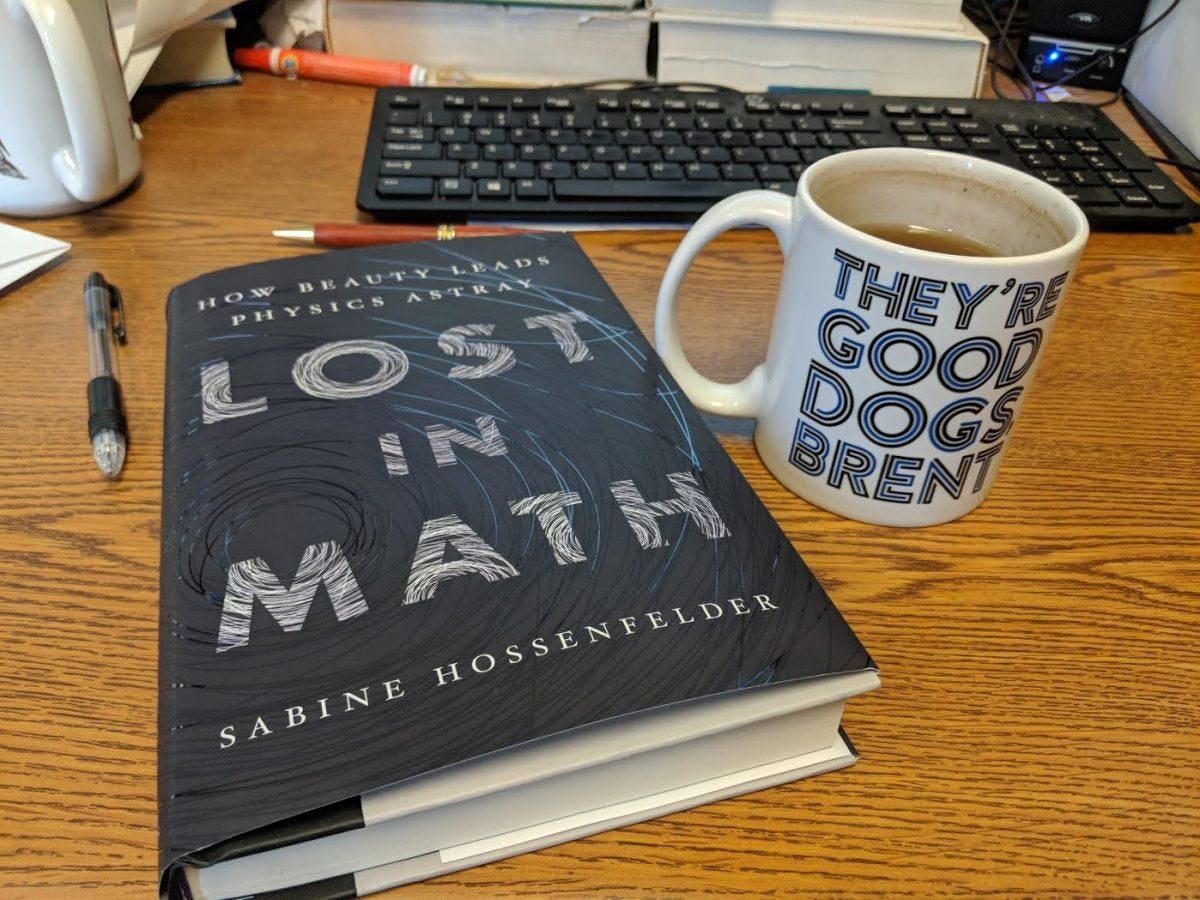 The difference between particle physics and quantum foundations

Sabine Hossenfelder, another old school physics blogger, has released a new book, Lost in Math: How Beauty Misleads Physics (currently Amazon’s #1 bestseller in epistemology…). As you might guess from this title, it is largely an argument about the problems with using “beauty” in the form of mathematical elegance as a guide for developing theories about the world in the absence of data.

Most of this has to do with particle physics, and Ethan gives a good overview of the many problems in this field in his review. However, it also touches on other topics, including the area of ​​”quantum foundations”.

There’s an unsurprising bit of nomenclatural confusion that sometimes arises here, as “fundamental particle physics” seems bound to be more closely related to “quantum foundations” than it is. As is often the case in the naming of academic subfields and other literary genres, the two are far more distinct than their common Latin root suggests. With “fundamental particle physics” the focus is really on the “particle” (although in the fuzzy sense it is also a field of “particle” that quantum physics requires): they are primarily concerned with the nature and interaction of things which cannot be subdivided into other things. “Quantum foundations”, on the other hand, emphasizes “quantum”: that’s the subfield concerned with interpretations of quantum mechanics, and what happens when you make measurements and all those fun things.

Hossenfelder’s book includes a large number of interviews with physicists working in the areas of interest, including, well, me. My role in the book is basically to make that distinction, and I’m reasonably happy with how it came out – the interview that appears in the book matches my recollection of what I said, and even better, I I always fundamentally agree with what he says I said. I am also very flattered to be there between Steven Weinberg and Frank Wilczek, who are both much more important than me for physics.

There was an edited-for-length piece, however, that seemed worth expanding into a blog post; so, this.

So if “fundamental” and “foundations” are very different areas, why are they both in the book? It’s not really a flaw in the book that they’re combined, it’s a very sensible adjustment, as the two areas share a sort of mostly aesthetic character. In other words, if you read or listen to particle theorists talk about physics, you hear a lot of talk about the “beauty” and “elegance” of particular models that have been invented to explain this or that, and the “ugliness” of the Standard Model, the most successful and least beloved theory in the history of human civilization. Similarly, the aesthetic language also figures prominently in debates over interpretations of quantum physics: proponents of many-worlds interpretations will extol its elegance and mathematical economy, opponents express revulsion at the idea of ​​all these “additional universes “, which seem unnecessarily baroque.

In both fields, therefore, there is a tendency to base arguments on essentially aesthetic concerns. I think there’s a huge difference between them, though, in that the issues with quantum foundations are really aesthetic in an essential way, whereas particle theory faces large quantitative Questions.

Quantum foundations are about interpreting quantum mechanics and, to simplify very slightly, mainly involve discussing what “really” happens in the process of measuring the results of an experiment. Interpretations differ on what they say happens when you go from an indeterminate wave function with a quantum system distributed over many possible states to a single definite observed outcome. Has the wave function undergone a real physical change? Was the preexisting state of a Bohmian particle simply revealed to us? Or has the wave function of the universe just gotten a little more complicated to encompass all possible outcomes? These are questions of interpretation, and they are largely aesthetic in nature.

What you don’t have in the quantum foundations is some kind of quantitative disagreement. The means by which you calculate the expected results of a particular experiment may be different from interpretation to interpretation, but what are these expectations is the same for everyone. We have well-established mathematical tools for calculating the probability of a particular outcome to a particular experiment, and they yield the same results with absurd precision. The difference between them is how you think about what happened from the beginning to the end of the experience. Which is important to frame the questions you ask, but doesn’t change the answers you get.

Fundamental particle physics, on the other hand, has enormous quantitative Questions. When we look into the distant universe, we see accelerated expansion, which can easily be explained, conceptually, due to the quantum properties of empty space. Quantitatively, however, when people use known physics to estimate the size of this effect, they get an answer that is off by a staggering amount – some claims put it at 120 orders of magnitude.

Similar problems arise in other fields – when we look at the universe we mostly see ordinary matter, not antimatter, and we know the physical properties needed to create excess matter over antimatter . Known physics, however, falls far short of explaining the size of the excess we see.

Both of these problems are quantitative in nature – physicists think they know the right way to do the math, and it doesn’t. These are real issues that are completely separate from the “ugliness” of having to specify a whole bunch of particle masses and coupling constants in the Standard Model, which is more purely an aesthetic matter. I’m not very moved by complaints about the number of input parameters or the “tuning” of their values, but I find “we think we know how to calculate these things, but the answers don’t come out correctly” much argument more convincing of the need for new approaches to theoretical physics.

So that’s the real separation between fundamental particle physics and quantum foundations. Particle physics has experiments where there is a clear quantitative disagreement between theory and experiment and they know in principle what experiments to do to distinguish the theories, whereas in quantum foundations no one knows (yet) how to do an experience that would give you a disagreement between two different interpretations. The recourse to aesthetic criteria therefore comes from a very different place in the two subfields: the difference between quantum interpretations is essentially aesthetic, while in fundamental particles the problem is more than no one has yet been able to do the experiments that would solve the real quantitative problems.

The other part I would add to what is in my comments in the book is a historical anecdote that was mentioned in my original conversation, but edited for length. That’s the context behind my last comment in the book, though, which was “maybe the math is just ugly and someone needs to tackle it.”

It was, in part, a reference to the history of quantum electrodynamics, which has to do with many problems concerning the properties of the electron. When physicists in the 1930s tried to calculate some really fundamental properties of the electron by quantum means, they got absurd answers: among them, the mass of the electron should be infinite, due to its interaction with its own electric field. For a time they hoped to dodge this problem, but improved experiments after World War II made it clear that it had to be dealt with.

Calculating this difference involves subtracting an infinite quantity from another and getting a finite answer, which is mathematically tricky and only works under very strict conditions. Some of the physicists involved, including Niels Bohr, thought it would be solved another way. Bohr even hoped that it would take a radical departure from known physics to produce an elegant solution.

It turned out, however, that all it took was a bunch of ugly math. Julian Schwinger did a bunch of math and showed that in fact the mathematical conditions needed to subtract infinity from infinity and get a reasonable answer for the energy of an electron in a magnetic field were met. Richard Feynman found a friendlier way to do the same trick, and Freeman Dyson showed that the two methods were in fact the same thing, now falling under the general heading of “renormalization”.

Some key figures in 1930s physics found this disappointing and aesthetically unsatisfactory. Paul Dirac, whose relativistic model of the electron started the whole thing, never liked renormalization, and I believe he went to his grave thinking it was ugly. But it works and remains at the center of our best models for calculating things in quantum mechanics, which many modern physicists find beautifully elegant.

So that’s the reference I was making implicitly, and it fits well with the subject of Hossenfelder’s book. Much of the effort in Fundamental Particle Theory has been trying to find elegant and radical ways to do calculations that are not correct and seem to require an awful amount of tweaking. There’s still the chance that an experiment will happen that shows they’re on the right track, but it could also be that the math is really hard and ugly, and some future Schwinger needs to grapple with it.