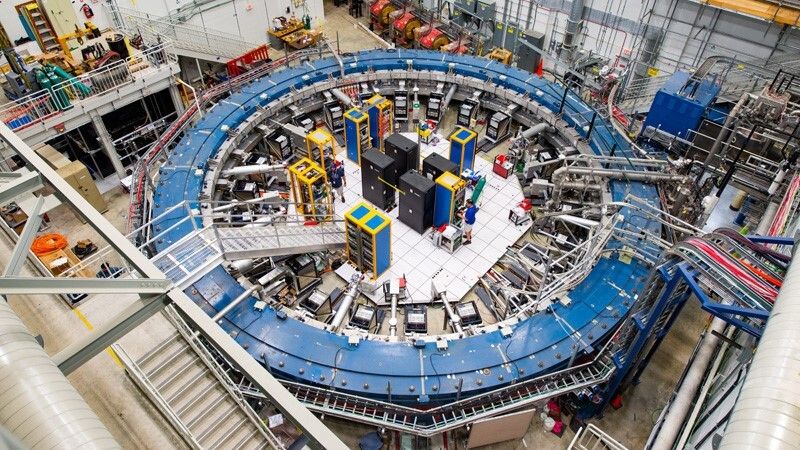 The results of one of the most eagerly awaited experiments in particle physics have arrived, and they could be about to make every researcher’s wildest dreams come true: they might, might, shatter physics. as we know it.

Evidence from the Fermi National Accelerator Laboratory near Chicago suggests a tiny subatomic particle known as the muon wobbling far more than theory predicts. The best explanation, physicists say, is that the muon is being pushed by types of matter and energy completely unknown to physics.

If the results are true, the discovery represents a breakthrough in particle physics of a kind not seen for 50 years, when the mainstream theory to explain subatomic particles was first developed. The tiny oscillation of the muon – created by the interaction of its intrinsic magnetic field, or magnetic moment, with an external magnetic field – could shake the very foundations of science.

“Today is an extraordinary day, long awaited not only by us but by the entire international community of physicists,” said Graziano Venanzoni, co-spokesperson of the Muon g-2 experience and physicist at the Italian National Institute of Nuclear Physics, said in a press release.

Related: Beyond Higgs: 5 elusive particles that could be lurking in the universe

Sometimes known as “big electrons”, muons look like their better-known cousins, but are 200 times heavier and radioactively unstable – decaying within millionths of a second into electrons and tiny ghostly chargeless particles called neutrinos. . Muons also have a property called spin which, when combined with their charge, causes them to behave as if they were tiny magnets, causing them to wobble like tiny gyroscopes when immersed in a magnetic field.

But today’s results, from an experiment in which physicists sent muons whistling around a superconducting magnetic ring, appear to show that the muon wobbles far more than it should. The only explanation, according to the scientists in the study, is the existence of particles not yet accounted for by the set of equations that explain all subatomic particles, called the Standard Model – which has remained unchanged since the mid-1990s. 1970s. These exotic particles and associated energies, the idea suggests, would push and pull on the muons inside the ring.

The Fermilab researchers are relatively confident that what they saw (the extra oscillation) was a real phenomenon and not a statistical fluke. They put a number on that confidence of “4.2 sigma,” which is incredibly close to the 5 sigma threshold at which particle physicists declare a breakthrough discovery. (A 5 sigma result would suggest there is a 1 in 3.5 million chance of this happening by chance.)

“This quantity that we are measuring reflects the interactions of the muon with everything else in the universe. But when theorists calculate the same quantity, using all known forces and particles from the Standard Model, we don’t get the same answer. ” Renee Fatemi, a physicist at the University of Kentucky and simulation lead for the Muon g-2 experiment, said in a statement. “This is strong evidence that the muon is sensitive to something that is not in our best theory.”

However, a competing calculation made by a separate group and published on Wednesday April 7 in the journal Nature could deprive the oscillation of its meaning. According to the calculations of this team, which give a much larger value to the most uncertain term of the equation which predicts the rocking motion of the muon, the experimental results are entirely consistent with the predictions. Twenty years of particle hunting might have been for naught.

“If our calculations are correct and the new measurements don’t change the story, it looks like we don’t need new physics to explain the muon’s magnetic moment — it follows the rules of the Standard Model,” Zoltan said. Fodor, a Penn State physics professor and leader of the research team that published the Nature paper, said in a press release.

But Fodor added that since his group’s prediction was based on an entirely different calculation with very different assumptions, their results were far from conclusive. “Our finding means that there is a tension between the previous theoretical results and the new ones. This discrepancy needs to be understood,” he said. “Furthermore, new experimental results could be close to old or closer to previous theoretical calculations. We have many years of excitement ahead of us.”

Essentially, physicists won’t be able to say conclusively whether brand new particles are firing their muons until they can agree exactly how the existing 17 Standard Model particles also interact with muons. . Until a theory prevails, physics hangs in the balance.