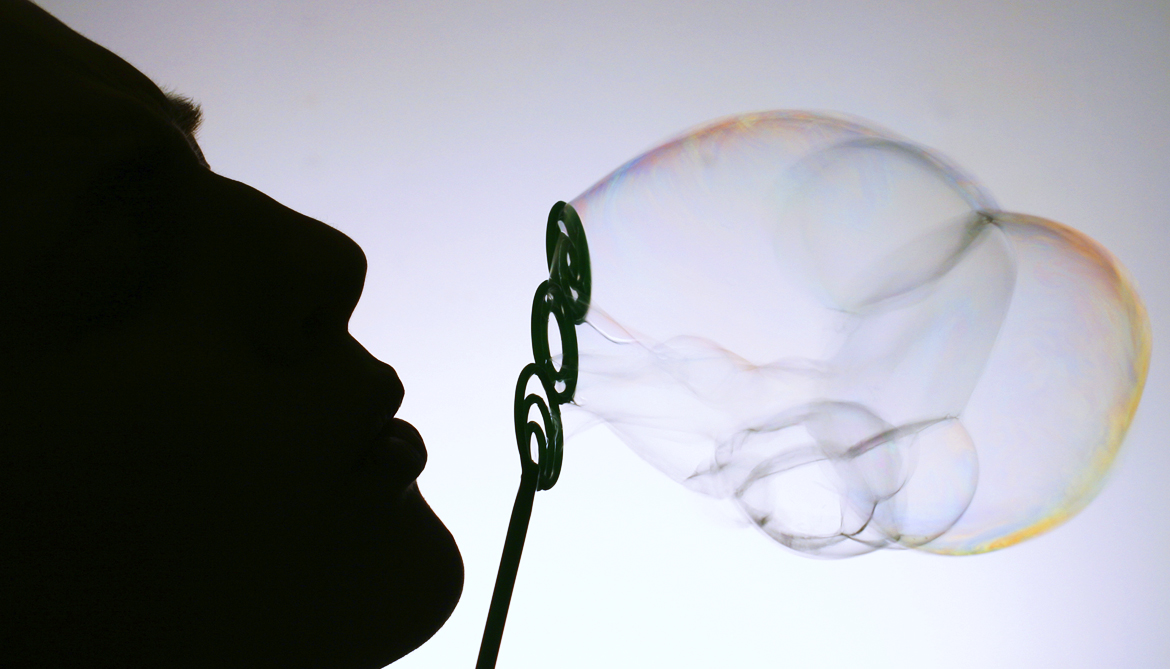 You are free to share this article under the Attribution 4.0 International License.

Have you ever wondered what theoretical physicists actually do? In honor of the 100th anniversary of Albert Einstein’s theory of general relativity, Brandeis University writer Leah Burrows sat down with a few to find out.

Theoretical physics is a lot like sex, Nobel laureate Richard Feynman once joked. “Of course it can give practical results, but that’s not why we do it.”

The prevailing stereotype outside and inside science is that theoretical physicists stare firmly at their navels and play in a sandbox of their own creation.

Time to throw that stereotype out the window (and note how it falls to Earth with constant acceleration. Thanks, theoretical physics!)

Sure, theoretical physics can get weird, and some theories are pretty far off, but the inquiry is always driven by a hunger to understand the universe fundamentally.

Physicists in the Brandeis High Energy and Gravitation Theory group study bizarre principles like holography, which postulates that all information in the universe is stored on a two-dimensional surface and that we are just projections of these informations. And then there’s quantum entanglement, which even Einstein called “fantastic.”

But at the heart of the group’s research is a simple question: what is space?

Einstein described how space is connected to time and how it interacts with mass. But he never theorized what space is, how it is formed or what it is made of.

“Since Einstein, our questions have grown bigger and deeper,” says Matthew Headrick, assistant professor of physics. “We want to understand the nature of space.”

“Amazingly, in some cases, theorists have discovered that these two very different theories are actually secretly the same,” Headrick says. “Between GR and QFT, there is a kind of one-to-one map. We know some of the commonalities, but we are still unaware of many others.

Essentially, Headrick and other theoretical physicists are constructing a Rosetta Stone – a kind of bilingual dictionary – using holography, general relativity and quantum field theory. This translation tool will expose how GR and QFT are connected to each other and how to build a new language that obeys the properties of GR and QFT.

Word by word, Headrick and his colleagues test and build a framework of conjectures.

“If you are sure that a conjecture obeys the properties it should obey, you can enter it into the dictionary,” says Headrick. “Every little entry tells us more about space.”

One of the conjectures that the Brandeis theorists have launched concerns the relationship between the geometry of space and the quantum information it contains.

Mathematically, some areas of curved space contain minimal surfaces, a surface that minimizes its area. Dip a wand in soapy water and the soap film will stretch perfectly flat over the shape of the wand. This is a minimum surface.

“If the area of ​​this soap film is expressed in fundamental units, that tells us about quantum entanglement in the QFT,” says Headrick.

In other words, Headrick and his colleagues use the mathematical language of general relativity, geometry, to extrapolate a quantum property. This calculation, in turn, provides new insights into how the two languages ​​are interconnected.

This idea also provides a clue to the nature of space.

“This suggests that, fundamentally, the space we live in and take for granted is assembled from a quantum entanglement,” Headrick says.

The next step is to figure out why.

The answers to these and other questions will hopefully give researchers the words and syntax needed to compose a theory of gravity in the language of quantum mechanics. It is the holy grail of modern theoretical physics: a theory of quantum gravity.

But what does this have to do with reality? Richard Feynman may not have cared about the practical results of theoretical physics, but some do.

It took Einstein 10 years to develop general relativity, and it took physicists another 40 years to understand the black holes he predicted. Today, 100 years after the theory was published, relativity is ubiquitous in our daily lives. Without an understanding of it, for example, we wouldn’t have GPS.

But more important than the inventions sparked by a theory is the knowledge that a theory advances, says Headrick.

“Einstein, Feynman and others profoundly changed our understanding of nature,” he says.

And that’s why theoretical physicists do it.

Discovery of particle physics raises hopes for a theory of everything