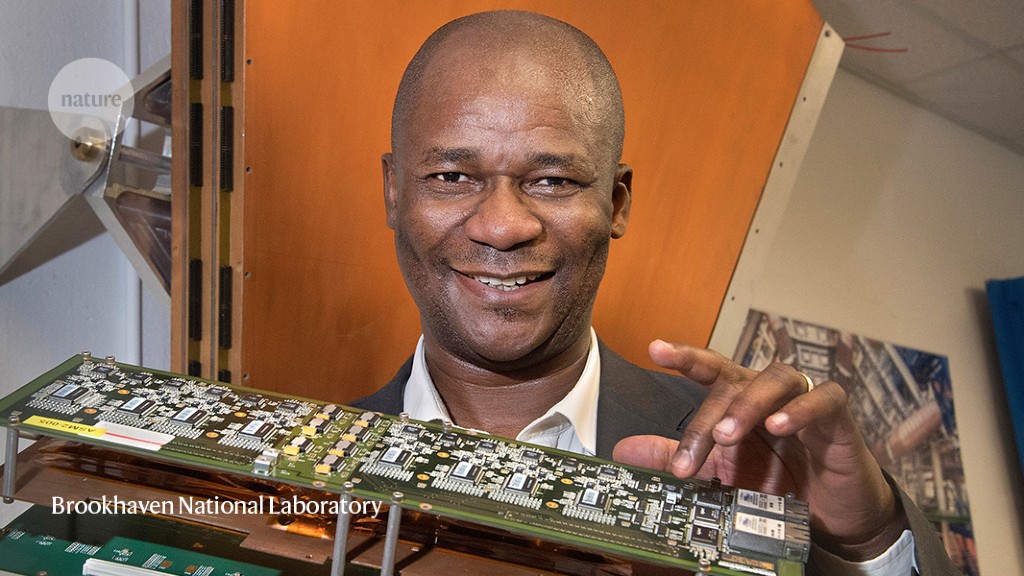 This year, thousands of particle physicists debated the future of their field in the United States, in a roughly once-a-decade planning exercise called Snowmass. For the first time, the process — which influences U.S. federal funding — elevated diversity, equity, and inclusion (DEI) issues among the top ten topics, or boundaries, that were discussed.

DEI was part of Snowmass’ ‘community engagement’ frontier, alongside issues such as career development, education and outreach. Physics in the United States is heavily dominated by white men; in 2018, women only received 22% of doctorates in physics and only 7% went to underrepresented minorities1.

Nature spoke to Kétévi Assamagan, a particle physicist at Brookhaven National Laboratory in Upton, New York, and co-organizer of the Community Engagement Frontier, about the DEI recommendations that emerged from the Snowmass process — and why meritocracy in particle physics is an illusion.

DEI issues were more prominent than ever in the Snowmass process. Why now?

The death of George Floyd in 2020, and other times police have killed black people, have made people more aware that something needs to be done. Many institutions and organizations have started paying attention to DEI issues and work climate.

But this does not necessarily translate into action. In an anonymous survey we did at Snowmass, we saw that men, in general, believe less that there is a problem with diversity. They are the most important group in physics and the people who need to be convinced if we want to translate everything we talk about into change.

Does particle physics have a particular problem with diversity?

Particle physics wasn’t meant to exclude people, but that’s how it evolved. This requires a threshold of funding and access to education, and this is where exclusion and marginalization, especially of people in developing countries, comes into play.

How do you convince people that particle physics is not a meritocracy?

People in the mainstream culture think, “I’m not racist, I don’t see any racism in my band, so if these people work hard, it’ll be fine.” But research has shown that there is far more underrepresentation in our field than meritocracy suggests.

The culture is not welcoming and the climate is not conducive to the presence of certain people. Unconscious bias fuels how people progress and rise to higher positions, and how senior managers then maintain that culture. We do not ask for favoritism for any group. We’re talking about making the environment and culture work for everyone as it does for the majority.

Can you give me examples of how an unwelcoming climate can affect particle physicists?

Someone might ask a female physicist, “Can you bring me some coffee?” Or I could go to my lab and a newly hired white person could ask me, “When are you going to clean my room?” It is assumed that people who look like me can only be there to do this kind of work. The police were called on co-workers because they were in the building where people didn’t expect them to be.

These incidents make people very uncomfortable and mean that you have to work to demonstrate that you are in that space because you have the training and the ability to be there. People might also say that you are a “diversity recruit”. As minorities, we’re supposed to take all those things, ignore them, and excel like everyone else.

What are some of your recommendations for improving the working climate and encouraging diversity?

It starts with enforcing a code of conduct for everyone, including anti-harassment policies and policies to protect victims when reporting concerns. Conducting work climate surveys will tell you what your community needs. For example, for people with disabilities, you should ensure that meetings are organized with their needs in mind.

You also need to start engaging with science in schools and building the pipeline – there are minority-serving institutions that have a lot of capacity that particle physics can tap into.

Leadership is also important. One of the papers submitted to Snowmass says there needs to be a cultural shift where people are chosen for leadership positions by excellence and then promote an environment of fairness and excellence, for example by away from automatically rewarding privileges such as coming from a better university.

How will Snowmass recommendations be implemented?

The American Physical Society’s Division of Particles and Fields is forming a committee to see if they can find a way to coordinate efforts across different agencies and remind people that we have a set of recommendations for the institutions. This means that at the next Snowmass we won’t have to discuss the same things again.

How involved were physicists in the frontier of community engagement during Snowmass?

Not enough. Very few people participated in community engagement activities, compared to the broad areas of physics. All of this research work has been done by just a few people. People feel they understand the issues and want solutions, but they don’t have a lot of time to devote to them.

This interview has been edited for length and clarity.